Our fans – the Flanatics have been asking about new flavours and many have been mentioning COCONUT!  So we’ve been hard at work and we’ve created our Creamy Coconut Leche Flan. Our quest to find new and exciting flavours have taken us around the world and the newest addition to the Flantastic main menu was inspired by the Caribbean. We at Flantastic have taken the flavour of the tasty and sweet coconut and infused it into the best Creamy Coconut Flan in Toronto!

We use the same Flantastic cooking technique, but we’ve accentuated the coconutty flavour that will remind you of those relaxing beautiful summer days at the beach, or the tropical islands that we all crave to be on.

Coconut is used in various forms in Filipino cuisine. The Philippines is one of the highest producers and exporters of this delicious fruit. The Coconut Palm is also called “the tree of life”. It is one of the most beneficial trees in the world because of its usefulness in various industries. Besides being anti-viral, anti-bacterial and anti-fungal, it possesses many health benefits.  The fruit is high in manganese, copper, iron, selenium, and fibre. The coconut is delicious and healthy!

Our Creamy Coconut Flan has been tried and tested and it is gaining popularity fast. Send us a message and put in your order now. We know you’ll love this delicious addition to the Flantastic dessert lineup! 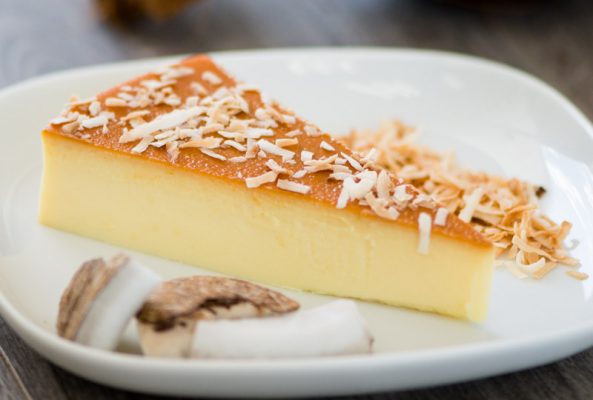